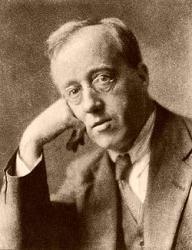 Gustav Holst (b. Chelteham, Gloucestershire, England, September 21, 1874, d. London, England, May 25, 1934) was a renowned British composer and musician. Having studied at Cheltenham Grammar School, he soon obtained a professional position as an organist, and later as choirmaster. In 1892, Holst composed a two-act operetta, which so impressed his father that he borrowed the money to send Holst to the Royal College of Music. Severe neuritis in his right hand later caused him to give up the keyboard, and Holst turned to the trombone and composing. In 1895 Holst met Ralph Vaughan Williams, and the two became lifelong friends. Vaughan Williams helped Holst land his first job as a singing teacher. Holst became very interested in Indian and Hindu culture, and composed a number of operas translated from Sanksrit myths. These were not received well in England, however. Holst is best known for his composition, The Planets, as well as . The success of these two works garnered Holst the leisure to leave teaching and spend all his time composing. His later works were not met with such great success, however, and Holst’s later years were spent in much weariness, though he continued to write, composing a total of thirty operas. Holst died after an operation left his heart too weak.