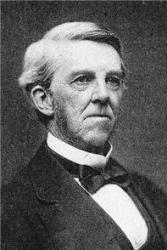 Holmes, Oliver Wendell, M.D, LL.D., son of the Rev. Abiel Holmes, D.D. of Cambridge, U.S.A., was born at Cambridge, Aug. 29, 1809, and educated at Harvard, where he graduated in 1829. After practising for some time in Boston, he was elected in 1847 to the chair of Anatomy, in Harvard. His writings in prose and verse are well known and widely circulated. They excel in humour and pathos. Although not strictly speaking a hymnwriter, a few of his hymns are in extensive use, and include:—
1. Father of mercies, heavenly Friend. Prayer during war.
2. Lord of all being, throned afar. God's Omnipresence. This is a hymn of great merit. It is dated 1848.
3. 0 Lord of hosts, Almighty King. Soldiers’ Hymn. Dated 1861.
4. 0 Love divine that stoop'st to share. Trust. 1859.
Of these Nos. 2 and 4 are in his Professor at the Breakfast Table, and are in common use in Great Britain, in Martineau's Hymns, 1873, and others. In 1886 the D.C.L. degree was conferred upon Professor Holmes by the University of Oxford. He was a member of the Unitarian body. He died Oct 7, 1894. [Rev. F. M. Bird, M.A.]