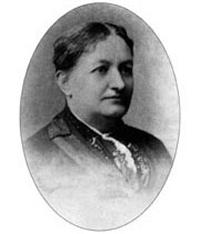 HENRY, Mrs. Sarepta M. I., evangelist, temperance reformer, poet and author, born in Albion, Pa., 4th November, 1839. her father Rev. H. Nelson Irish, was a Methodist clergyman of the old style. He was preaching in Albion at the time of the daughter's birth. In 1841 he was sent to Illinois as a missionary, where he did heroic pioneer work and where he ended his days. In 1859 Miss Irish entered the Rock River Seminary, in Mt. Morris, Ill., when she had for her pastor Rev. J. H. Vincent, then just coming into his life work. Recognition had been given to her literary ability, and during her school days she won many honors in composition. On 7th March, 1861, Miss Irish became the wife of James W. Henry, of East Homer, N. Y. The Civil War broke in upon the plans of the young couple and left Mrs. Henry, in 1871, a soldier's widow. The trio of children born from this union are just such as would be expected from so true a marriage. Mary, an alumna of the Northwestern University in Evanston, Ill., is already a writer of acknowledged ability in both prose and verse, and at the national convention of the Woman's Christian Temperance Union in New York, in 1888, she was elected to the position of superintendent of the press department. Alfred, the oldest son, is a faithful and eloquent clergyman, and Arthur is an author. Mrs. Henry was among the first to join the crusade against rum. From the beginning of the organization of the Woman's Christian Temperance Union she has been associated with the national body as superintendent of evangelical work and as evangelist. The result of her seven years of service in gospel temperance in Rockford, Ill., would alone suffice to crown the labors of any ordinary life-time. A partial record of this work is found in her book "Pledge and Cross." Her published books number fourteen, of which two, "Victoria," written during the first year of her daughter's life, and "Marble Cross," are poems. The prose works are "After the! Truth," in four volumes, "Pledge and Cross," "Voice of the Home and Its Legend," "Mabel's Work," "One More Chance," "Beforehand," "Afterward," "Unanswered Prayer," and "Frances Raymond's Investment." Mrs. Henry has long occupied pulpits among all denominations throughout the land. Through her evangelistic work saloons have been closed, churches built and hundreds converted. Her home is now in Evanston, Illinois.

American Women: fifteen hundred biographies, with over 1,400 photos: a comprehensive encyclopedia of the lives and achievements of American women during the nineteenth century (Rev. ed.) by Frances E. Willard an Mary A Livermore (New York/Chicago/Springfield, OH: Mast, Crowell & Kirkpatrick, 1897

S. M. I. Henry (pen name, Dina Linwood; November 4, 1839 – January 16, 1900) was an American evangelist, temperance reformer, poet and author. She was among the first to join the Women's Crusade. From the beginning of the organization of the Woman's Christian Temperance Union (WCTU), she was associated with the national body as superintendent of evangelical work and as evangelist. For seven years, she was associated with gospel temperance in Rockford, Illinois. In 1888, she served as the chairperson of the National WCTU's Evangelistic Bureau. A partial record of this work is found in her book Pledge and Cross. Henry occupied pulpits among all denominations throughout the United States. Through her evangelistic work, saloons were closed, churches built and hundreds converted. Her published
Wikipedia Biography
TextsTunesHymnals