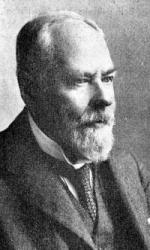 Basil Harwood was born in Woodhouse, Gloucestershire (the second youngest of 12 children) on 11 April 1859. His mother died in 1867 when Basil was eight. His parents were Quakers but his elder sister Ada, on reaching 21 in 1867, converted to the Anglican Church. Basil was allowed to attend the ceremony at the Church of England in Almondsbury and this is where he was first drawn to organ music and choral singing. His father, Edward, remarried two years later in 1869 to a lady from an Anglican family. Basil was now sent to the Montpellier School in Weston-super-Mare for a year. In 1871, at 12 he was enrolled in Clevedon, the preparatory school for Charterhouse where he was first to formally study music.

He went up to Charterhouse in 1874 and left in 1876 having won a leaving Exhibition to Trinity College, Oxford where he initially studied Classics (1879) and Modern History (1880). He then studied for a further two years, 1881–1882, at the Leipzig Conservatory under Carl Reinecke and Salomon Jadassohn. It was here in 1882, Basil composed his first anthem for chorus and organ "O Saving Grace." He returned from Leipzig to realise that he had now passed the age limit to study music formally.

In 1883, Basil became organist of St. Barnabas Church, Pimlico completing his Sonata in C# Minor here in 1885, selling the copyright to the publisher Schott for one shilling a year or two later. After this success, he then moved to Ely Cathedral in 1887 where he wrote the bulk of Dithyramb, possibly his greatest organ work. His final appointment was as organist at Christ Church, Oxford and as precentor of Keble College, Oxford from 1892 to 1909. Whilst there he co-founded and conducted the Oxford Bach Choir which helped to earn him his degree as Doctor of Music. He conducted the Oxford Orchestral Association (1892–1898).

During this time, he met and married Mabel Ada Jennings (the daughter of George Jennings) (who had become a pupil of his in 1896) at All Souls St. Marylebone, London (27 December 1899). Mabel had studied music herself, piano and composition, and was also a writer. She may well have composed lyrics for some of his lesser known tunes. At an advanced age she wrote a small volume of collected poems named Questing Soul.

He retired early at 50 (in 1909) after the death of his father, Edward Harwood, from whom he inherited the family estate of Woodhouse having outlived his seven older brothers. Soon after moving in he had a three manual chamber organ built in the library by Bishop & Sons of Ipswich (now in Minehead Parish Church), on which he promptly finished his Sonata in F# Minor. He continued to compose prolifically.

He was a keen walker, and named many of his hymn tunes after local places that he loved to visit, the most notable being the hymn tunes such as Tockington, Olveston, Almondsbury and Thornbury.

In 1936 advancing in years, he let the Woodhouse estate and moved to Bournemouth. Part of the estate, Woodhouse Down, was later sold to his contemporary Robert Baden-Powell who was two years older than he was and who had also attended Charterhouse School, and is used as a Scout Camp to this day.

In 1939, at eighty, he moved to London, taking a flat in Fleet Street. After a long life, he died on 3 April 1949, eight days short of his 90th birthday, at Courtfield Gardens in the Royal Borough of Kensington, London. A memorial service was held in St Paul's Cathedral on 22 April 1949. Mabel survived him, dying shortly before her 103rd birthday on 20 July 1974. He was survived by two sons; Major John Edward Godfrey Harwood (1900–1996) and Basil Antony Harwood (1903–1990) Senior Master of the Supreme Court, Q.B.D. and Queen's Remembrancer.

His remains are interred in St. Barnabas Church, Pimlico and marked by a plaque inset in floor of the chancel, close to where he would have stood to conduct the choir.

He composed cantatas, church music and works for the organ; his Service in A flat, the anthem O how Glorious and the hymn tunes LUCKINGTON ("Let all the world in every corner sing") and THORNBURY ("Thy hand O God has guided"), first used during a festival of the London Church Choir Association, remain in the Anglican repertory.