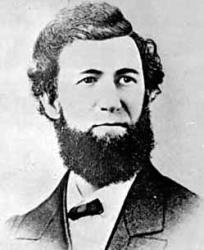 Benjamin Russell Hanby was born July 22, 1833, the oldest of eight children, to Bishop William Hanby in Rushville, OH. The family moved to Westerville,OH where Bishop Hanby was a "conductor" on the Underground Railroad. In his short life Benjamin graduated from Otterbein, taught school, became a United Brethren minister, started a singing school, was editor for John Church publishers in Cincinnati and composed many songs and hymns before he died of tuberculosis March 15, 1867. His home in Westerville was Ohio's first memorial to a composer. It was a stop on the Underground Railroad for slaves escaping to Canada and is a national historic site, a Methodist church Landmark and a Network to Freedom site for the National Park Service. There is a Hanby Residence Hall at Otterbein University. Best known for "Up on the housetop" and "Darling Nellie Gray," Hanby published many hymns including "Little Eyes" and "Who is He?

Benjamin Russell Hanby (July 22, 1833 – March 16, 1867), also given as Benjamin Russel Hanby, was an American composer, educator, pastor, and abolitionist who wrote approximately 80 songs. The most famous are "Darling Nelly Gray" and the Christmas songs "Up on the House Top" and "Who Is He In Yonder Stall?". Hanby was born in Rushville, Ohio. He moved to Westerville, Ohio in 1849, at the age of sixteen, to enroll at Otterbein University. He was involved in the Underground Railroad with his father, Bishop William Hanby.
Wikipedia Biography
TextsTunesHymnals