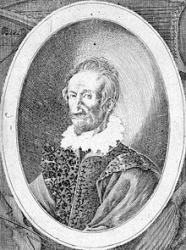 The music of Claude Goudimel (b. Besançon, France, c. 1505; d. Lyons, France, 1572) was first published in Paris, and by 1551 he was composing harmonizations for some Genevan psalm tunes-initially for use by both Roman Catholics and Protestants. He became a Calvinist in 1557 while living in the Huguenot community in Metz. When the complete Genevan Psalter with its unison melodies was published in 1562, Goudimel began to compose various polyphonic settings of all the Genevan tunes. He actually composed three complete harmonizations of the Genevan Psalter, usually with the tune in the tenor part: simple hymn-style settings (1564), slightly more complicated harmonizations (1565), and quite elaborate, motet-like settings (1565-1566). The various Goudimel settings became popular throughout Calvinist Europe, both for domestic singing and later for use as organ harmonizations in church. Goudimel was one of the victims of the St. Bartholomew's Day massacre of Huguenots, which oc­curred throughout France.