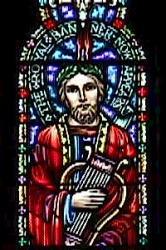 Venantius Honorius Clematianus Fortunatus (b. Cenada, near Treviso, Italy, c. 530; d. Poitiers, France, 609) was educated at Ravenna and Milan and was converted to the Christian faith at an early age. Legend has it that while a student at Ravenna he contracted a disease of the eye and became nearly blind. But he was miraculously healed after anointing his eyes with oil from a lamp burning before the altar of St. Martin of Tours. In gratitude Fortunatus made a pilgrimage to that saint's shrine in Tours and spent the rest of his life in Gaul (France), at first traveling and composing love songs. He developed a platonic affection for Queen Rhadegonda, joined her Abbey of St. Croix in Poitiers, and became its bishop in 599. His Hymns far all the Festivals of the Christian Year is lost, but some of his best hymns on his favorite topic, the cross of Jesus, are still respected today, in part because of their erotic mysticism.

Bert Polman
==================
Fortunatus, Venantius Honorius Clementianus, was born at Ceneda, near Treviso, about 530. At an early age he was converted to Christianity at Aquileia. Whilst a student at Ravenna he became almost blind, and recovered his sight, as he believed miraculously, by anointing his eyes with some oil taken from a lamp that burned before the altar of St. Martin of Tours, in a church in that town. His recovery induced him to make a pilgrimage to the shrine of St. Martin, at Tours, in 565, and that pilgrimage resulted in his spending the rest of his life in Gaul. At Poitiers he formed a romantic, though purely platonic, attachment for Queen Rhadegunda, the daughter of Bertharius, king of the Thuringians, and the wife, though separated from him, of Lothair I., or Clotaire, king of Neustria. The reader is referred for further particulars of this part of the life of Fortunatus to Smith and Wace's Dictionary of Christian Biography, vol. ii. p. 552. It is sufficient to say here that under the influence of Rhadegunda, who at that time lived at Poitiers, where she had founded the convent of St. Croix, Fortunatus was ordained, and ultimately, after the death of Rhadegunda in 597, became bishop of Poitiers shortly before his own death in 609.

The writings, chiefly poetical, of Fortunatus, which are still extant, are very numerous and various in kind; including the liveliest Vers de Societé and the grandest hymns; while much that he is known to have written, including a volume of Hymns for all the Festivals of the Christian Year, is lost. Of what remains may be mentioned, The Life of St. Martin of Tours, his Patron Saint, in four books, containing 2245 hexameter lines. A complete list of his works will be found in the article mentioned above.
His contributions to hymnology must have been very considerable, as the name of his lost volume implies, but what remains to us of that character, as being certainly his work, does not comprise at most more than nine or ten compositions, and of some of these even his authorship is more than doubtful. His best known hymn is the famous "Vexilla Regis prodeunt," so familiar to us in our Church Hymnals in some English form or other, especially, perhaps, in Dr. Neale's translation, "The Royal Banners forward go." The next most important composition claimed for him is "Pange, lingua, gloriosi praelium certaminis," but there would seem to be little doubt according to Sirmond (Notis ad Epist. Sidon. Apollin. Lib. iii., Ep. 4), that it was more probably written by Claudianus Mamertus. Besides these, which are on the Passion, there are four hymns by Fortunatus for Christmas, one of which is given by Daniel, "Agnoscat omne saeculum," one for Lent, and one for Easter. Of "Lustra sex qui jam peregit," of which an imitation in English by Bishop. Mant, "See the destined day arise," is well-known, the authorship is by some attributed to Fortunatus, and by some to St. Ambrose.

The general character of the poetry of Venantius Fortunatus is by no means high, being distinguished neither for its classical, nor, with very rare exceptions, for its moral correctness. He represents the "last expiring effort of the Latin muse in Gaul," to retain something of the "old classical culture amid the advancing tide of barbarism." Whether we look at his style, or even his grammar and quantities, we find but too much that is open to criticism, whilst he often offends against good taste in the sentiments he enunciates. Occasionally, as we see in the "Vexilla Regis," he rises to a rugged grandeur in which he has few rivals, and some of his poems are by no means devoid of simplicity and pathos. But these are the exceptions and not the rule in his writings, and we know not how far he may have owed even these to the womanly instincts and gentler, purer influence of Rhadegunda. Thierry, in his Récits des Temps Mérovingiens, Récit 5, gives a lively sketch of Fortunatus, as in Archbishop Trench's words (Sacred Latin Poetry, 1874,p. 132), "A clever, frivolous, self-indulgent and vain character," an exaggerated character, probably, because one can hardly identify the author of "Vexilla Regis," in such a mere man of the world, or look at the writer of "Crux benedicta nitet, Dominus qua carne pependit" q.v., as being wholly devoid of the highest aspirations after things divine. A quarto edition of his Works was published in Rome in 1786. [Rev. Digby S. Wrangham, M.A.]