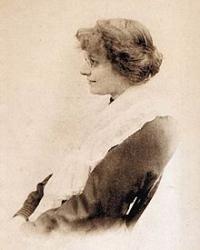 Eleanor Farjeon, (born Feb. 13, 1881, London--died June 5, 1965, Hampstead, London), English writer for children whose magical but unsentimental tales, which often mock the behaviour of adults, earned her a revered place in many British nurseries.

The daughter of a British novelist and granddaughter of a U.S. actor, Eleanor Farjeon grew up in the bohemian literary and dramatic circles of London. Attending opera and theatre at 4 and writing on her father’s typewriter at 7, Farjeon came to public attention at 16 as the librettist of an opera, with music by her brother Harry, which was produced by the Royal Academy of Music.

Her success with Nursery Rhymes of London Town (1916), simple tunes originally for adults but adapted and sung in junior schools throughout England, spurred her writing. In addition to such favourites as Martin Pippin in the Apple Orchard (1921) and The Little Bookroom (1955), which won the Carnegie Medal and the first Hans Christian Anderson Award, Farjeon’s prolific writings include children’s educational books, among them Kings and Queens (1932; with Herbert Farjeon); adult books; and memoirs, notably A Nursery in the Nineties (1935; rev. ed. 1960).