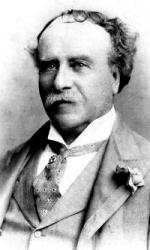 William H. Cummings (b. Sidbury, Devonshire, England, 1831; d. Dulwich, London, England, 1915) had a lifelong love of Felix Mendelssohn, sparked when he sang at age sixteen in the first London performance of Elijah, which was directed by Mendelssohn himself. As a young boy, Cummings had been a chorister at St. Paul's Cathedral and later sang in the choirs of the Temple Church, Westminster Abbey, and the Chapel Royal. Cummings became a famous tenor–he sang in oratorios and was especially known for his evangelist role in the Bach passions. He taught voice at the Royal Academy of Music and the Royal Normal College and School for the Blind in London and was also an accomplished organist. Cummings wrote books and articles on music history, wrote a biography of Henry Purcell and edited his music, and composed many choral pieces.