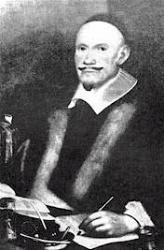 Johann Crüger (b. Grossbriesen, near Guben, Prussia, Germany, 1598; d. Berlin, Germany, 1662) Crüger attended the Jesuit College at Olmutz and the Poets' School in Regensburg, and later studied theology at the University of Wittenberg. He moved to Berlin in 1615, where he published music for the rest of his life. In 1622 he became the Lutheran cantor at the St. Nicholas Church and a teacher for the Gray Cloister. He wrote music instruction manuals, the best known of which is Synopsis musica (1630), and tirelessly promoted congregational singing. With his tunes he often included elaborate accom­paniment for various instruments. Crüger's hymn collection, Neues vollkomliches Gesangbuch (1640), was one of the first hymnals to include figured bass accompaniment (musical shorthand) with the chorale melody rather than full harmonization written out. It included eighteen of Crüger's tunes. His next publication, Praxis Pietatis Melica (1644), is considered one of the most important collections of German hymnody in the seventeenth century. It was reprinted forty-four times in the following hundred years. Another of his publications, Geistliche Kirchen Melodien (1649), is a collection arranged for four voices, two descanting instruments, and keyboard and bass accompaniment. Crüger also published a complete psalter, Psalmodia sacra (1657), which included the Lobwasser translation set to all the Genevan tunes.

Bert Polman
===============================
Crüger, Johann, was born April 9, 1598, at Gross-Breese, near Guben, Brandenburg. After passing through the schools at Guben, Sorau and Breslau, the Jesuit College at Olmütz, and the Poets' school at Regensburg, he made a tour in Austria, and, in 1615, settled at Berlin. There, save for a short residence at the University of Wittenberg, in 1620, he employed himself as a private tutor till 1622. In 1622 he was appointed Cantor of St. Nicholas's Church at Berlin, and also one of the masters of the Greyfriars Gymnasium. He died at Berlin Feb. 23, 1662. Crüger wrote no hymns, although in some American hymnals he appears as "Johann Krüger, 1610,” as the author of the supposed original of C. Wesley's "Hearts of stone relent, relent" (q.v.). He was one of the most distinguished musicians of his time. Of his hymn tunes, which are generally noble and simple in style, some 20 are still in use, the best known probably being that to "Nun danket alle Gott" (q.v.), which is set to No. 379 in Hymns Ancient & Modern, ed. 1875. His claim to notice in this work is as editor and contributor to several of the most important German hymnological works of the 16th century, and these are most conveniently treated of under his name. (The principal authorities on his works are Dr. J. F. Bachmann's Zur Geschichte der Berliner Gesangbücher 1857; his Vortrag on P. Gerhard, 1863; and his edition of Gerhardt's Geistliche Lieder, 1866. Besides these there are the notices in Bode, and in R. Eitner's Monatshefte für Musik-Geschichte, 1873 and 1880). These works are:—

1. Newes vollkömmliches Gesangbuch, Augspur-gischer Confession, &c, Berlin, 1640 [Library of St. Nicholas's Church, Berlin], with 248 hymns, very few being published for the first time.
2. Praxis pietatis melica. Das ist: Ubung der Gottseligkeit in Christlichen und trostreichen Gesängen. The history of this, the most important work of the century, is still obscure. The 1st edition has been variously dated 1640 and 1644, while Crüger, in the preface to No. 3, says that the 3rd edition appeared in 1648. A considerable correspondence with German collectors and librarians has failed to bring to light any of the editions which Koch, iv. 102, 103, quotes as 1644, 1647, 1649, 1650, 1651, 1652, 1653. The imperfect edition noted below as probably that of 1648 is the earliest Berlin edition we have been able to find. The imperfect edition, probably ix. of 1659, formerly in the hands of Dr. Schneider of Schleswig [see Mützell, 1858, No. 264] was inaccessible. The earliest perfect Berlin edition we have found is 1653.
The edition printed at Frankfurt in 1656 by Caspar Röteln was probably a reprint of a Berlin edition, c. 1656. The editions printed at Frankfurt-am-Main by B. C. Wust (of which the 1666 is in the preface described as the 3rd) are in considerable measure independent works.
In the forty-five Berlin and over a dozen Frankfurt editions of this work many of the hymns of P. Gerhardt, J. Franck, P. J. Spener, and others, appear for the first time, and therein also appear many of the best melodies of the period.
3. Geistliche Kirchen-Melodien, &c, Leipzig, 1649 [Library of St. Katherine's Church, Brandenburg]. This contains the first stanzas only of 161 hymns, with music in four vocal and two instrumental parts. It is the earliest source of the first stanzas of various hymns by Gerhardt, Franck, &c.
4. D. M. Luther's und anderer vornehmen geisU reichen und gelehrten Manner Geistliche Lieder und Psalmen, &c, Berlin, 1653 [Hamburg Town Library], with 375 hymns. This was edited by C. Runge, the publisher, and to it Crüger contributed some 37 melodies. It was prepared at the request of Luise Henriette (q.v.), as a book for the joint use of the Lutherans and the Re¬formed, and is the earliest source of the hymns ascribed to her, and of the complete versions of many hymns by Gerhardt and Franck.
5. Psalmodia Sacra, &c, Berlin, 1658 [Royal Library, Berlin]. The first section of this work is in an ed. of A. Lobwasser's German Psalter; the second, with a similar title to No. 4, and the date 1657, is practically a recast of No. 4,146 of those in 1653 being omitted, and the rest of the 319 hymns principally taken from the Praxis of 1656 and the hymn-books of the Bohemian Brethren. New eds. appeared in 1676, 1700, 1704, 1711, and 1736.
[Rev. James Mearns, M.A.]

Johann Crüger (9 April 1598 – 23 February 1662) was a German composer of well-known hymns. He was also the editor of the most widely used Lutheran hymnal of the 17th century, Praxis pietatis melica.
Wikipedia Biography
TextsTunesHymnals