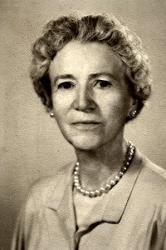 Julia C. Cory (Julia Buckley Cady Cory) was born in New York, NY in 1882. She was the daughter of a prominent New York architect, J. Cleveland Cady. Her father was also a Sunday school superintendent and amateur hymnologist. Partly because of his influence Julia began to write hymns at an early age. She was a member of the Brick Presbyterian Church. She married Robert Haskell Cory in 1911 and was a member of the Presbyterian Church in Englewood, NJ for all of her married life. She was a member of the Hymn Society that met in New York City all her adult life and died in Englewood, NJ in 1963. She raised 3 sons and they had 15 grandchildren.