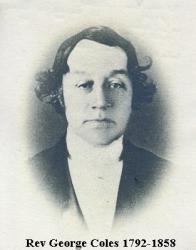 Rv George Coles United Kingdom 1792-1858. Born at Stewkley, England, he was converted at age 13 under John Wesley's ministry. He began preaching at age 22 and emigrated to America in 1818. He was a Methodist supply preacher on the Long Island circuit in NY and CT. The following year he became a member of the NY Conference and served several of the larger churches for several years. He married Belinda Wilson in 1820, and they had five children. They lived in several towns in NY during their lives. He served as editor of the “Christian Advocate and Journal” for 12 years, and the “Sunday School Advocate” for several years thereafter. He was a musician of some ability, and a good singer. He loved talking with children and often drew them around him. He authored “A concordance of the Holy Scriptures”, “Heroinces of Methodism”, and fiour other books. He died and is buried in Somers, NY. He kept journals, covering 50 years of activities.