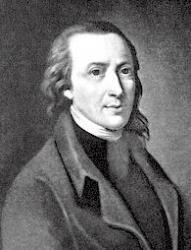 Claudius, Matthias, son of Matthias Claudius, Lutheran pastor at Reinfeld in Holstein (near Lübeck), was born at Reinfeld, Aug. 15, 1740. An ancestor, who died as a Lutheran pastor in 1586, had Latinized his name, Claus Paulsen, to Claudius Pauli, and his descendants had adopted Claudius as their surname. Claudius entered the University of Jena, in 1759, as a student of theology, but being troubled with an affection of the chest, and finding little attraction in the Rationalism of Jena, he turned his attention to law and languages. After a short visit to Copenhagen, as private secretary to a Danish count, he joined in 1768 the staff of the Hamburg News Agency (Adress-Comptoirnachrichten). Removing to Wandsbeck, near Hamburg, he undertook in 1771 the editing of the literary portion of the Wandsbecker Bote, and contributed a number of his poems to the Göttingen Musen-Almanach. In 1776 he was appointed one of the Commissioners of Agriculture and Manufactures of Hesse-Darmstadt, and in 1777 editor of the official Hesse-Darmstadt newspaper, which he conducted in the same spirit as his Wandsbeck Bote. At Darmstadt he became acquainted with Goethe (then living near by at Frankfurt), and with a circle of freethinking philosophers. During a severe illness in 1777, he realised, however, the spiritual emptiness of the life at Darmstadt; the buried seeds sown in his youth sprang up; and he once more became in faith as a little child. Renouncing position and income, he returned to Wandsbeck to re-edit the Bote, which he conducted in a distinctively Christian spirit. In 1788 he was appointed by the Crown Prince of Denmark auditor of the Scheswig-Holstein Bank at Altona, but continued to reside at Wandsbeck till 1813, when he was forced by the war to flee, and was unable to return till May, 1814. The next year he removed to the house of his eldest daughter in Hamburg, and died there Jan. 21, 1815 (Koch, vi. 417-429; Allg. Deutsche Biographie, iv. 279-281). His fugitive pieces appeared in two parts as Asmus omnia sua secum portans; oder sammtliche Werke des Wandsbecker Bothen, Wandsbeck and Hamburg, 1774 (pt. iii. 1777, iv. 1782, v. 1789, vi. 1797, vii. 1802, viii. 1812). While much of his poetry was distinctively Christian in its spirit, and many of his pieces might rank as popular sacred songs, yet he wrote no hymns designed for use in Church. Three pieces have, however, passed into the German hymn-books, all of which have been translated into English, viz.:—
i. Das Grab ist leer, das Grab ist leer. [Easter.] First published in pt. viii., 1812, as above, p. 121, in 10 stanzas. Translated as "The grave is empty now, its prey," by Dr. H. Mills, 1859, printed in Schaff’s Christ in Song, 1870.
ii. Der Mond ist aufgegangen. [Evening.] His finest hymn, conceived in a child-like, popular spirit—a companion to the more famous hymn, "Nun ruhen alle Walder " (q. v.). According to tradition it was composed during his residence at Darmstadt, 1762, while walking on the so-called Schnempelweg, a footpath leading by the river-side up to the Odenwald. First published in J. H. Voss's Musen-Almanach, Hamburg, 1770, p. 184, and then in pt. iv., 1782, as above, p. 57, in 7 stanzas of 6 lines. Included as No. 452 in the Oldenburg Gesang-Buch, 1791, as No. 570 in the Württemberg Gesang-Buch, 1842, and No. 509 in the Unverfälschter Liedersegen, 1851. The only translation in common use is:—
The silent moon is risen, good and full, as No. 322, in the Ohio Lutheran Hymnal, 1880.

Translations in common use:—
1. We plough the fields and scatter, by Miss J. M. Campbell, contributed to the Rev. C. S. Bere's Garland of Songs, Lond., 1861, p. 61 (later eds. p. 27). A free rendering in 3 stanzas of 8 lines, with chorus, entitled, "Thanksgiving for the Harvest." Since its reception into the Appendix to Hymns Ancient & Modern, 1868 (No. 360, ed. 1875, No. 383), it has passed into numerous hymnals in Great Britain, and America. In Thring's Collection, 1882, No. 609, st. iv., "Our souls, Blest Saviour, gather," is an original stanza by Rev. H. Downton, added to supply some distinctly Christian expressions to the hymn, and first published in the Record newspaper in 1875.
2. We plough the fertile meadows. Of this translation there are two forms greatly differing, both ascribed to Dr. S. F. Smith, but whether either form is really by him we have failed to ascertain. What seems to be the original form, in 6 stanzas of 4 lines and chorus, is found in the Methodist Free Church Sunday School Hymns; Curwen's New Child's Own Hymn Book &c. The other form, in 3 stanzas of 8 lines and chorus, is in Allon's Supplemental Hymns; New Congregational Hymn Book, &c.
3. We plough the ground, we sow the seed, in 4 stanzas of 8 lines with chorus, without name of translation, is No. 215 in G. S. Jellicoe's Collection, 1867. [Rev. James Mearns, M.A.]