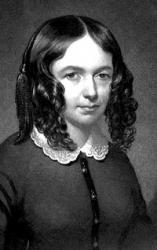 Browning, Elizabeth, née Barrett, daughter of Mr. Barrett, an English country gentleman, and wife of Robert Browning, the poet, was born in London 1809, and died at Florence in 1861. As a poetess she stands at the head of English female writers, and her secular works are well known. Sacred pieces from her works are in common use in America. They include:
1. God, named Love, whose fount Thou art. Love.
2. How high Thou art! Our songs can own. Divine Perfection.
3. Of all the thought of God, that are. Death.
4. What would we give to our beloved? Pt. ii. of No. 3.
5. When Jesus' friend had ceased to be. Friendship. Based on the death of Lazarus.
These hymns are in Beecher's Plymouth Collection 1855; Hedge and Huntington's Hymns for the Church of Christ, Boston, U.S., 1853, &c.

Elizabeth Barrett Browning (née Moulton-Barrett; /ˈbraʊnɪŋ/; 6 March 1806 – 29 June 1861) was an English poet of the Victorian era, popular in Britain and the United States during her lifetime. Born in County Durham, the eldest of 12 children, Elizabeth Barrett wrote poetry from the age of eleven. Her mother's collection of her poems forms one of the largest extant collections of juvenilia by any English writer. At 15, she became ill, suffering intense head and spinal pain for the rest of her life. Later in life, she also developed lung problems, possibly tuberculosis. She took laudanum for the pain from an early age, which is likely to have contributed to her frail health.
Wikipedia Biography
TextsTunesHymnals