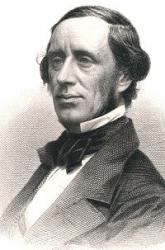 William Sterndale Bennett, born in Sheffield, England, April 13, 1816, died in London, Feb. 1, 1875. His father, an organist, died when he was three years old, and his education was cared for by his grandfather. At the age of eight (1824) he entered the choir of King's College Chapel at Cambridge, where his grandfather lived, and in 1826 was sent to London to study at the Royal Academy of Music. Here he studied composition under Lucas and Dr. Crotch, and pianoforte, first under W. H. Holmes, and then under Cipriani Potter. His first composition of note was his D minor pianoforte concerto, op. 1, written in 1832 and played by himself at the prize concert at the Academy in 1833. Mendelssohn was present and greatly encouraged the young composer. In 1836 the firm of Broadwood offered to pay his expenses for a year's study in Leipsic; here he came under the influence of Mendelssohn and Schumann, both of whom held his talent in high esteem. He came back to London after the specified year, but returned to Leipsic for another year's study in 1840. In 1843 he began to give successful chamber concerts in London, and in 1844 married Mary Anne Wood, daughter of a captain in the Navy. In 1849 he founded the London Bach Society, one of the results of which was the first performance in England of the Matthew Passion, April 6, 1854. In 1853 he was offered the conductorship of the Leipsic Gewandhaus concerts, and in 1856 he was elected to the chair of musical professor at the University of Cambridge, and shortly afterwards received the degree of Mus. Doc. In 1856 he was also made permanent conductor of the Philharmonic Society, a post which he resigned ten years later to become principal of the Royal academy of Music. In 11867 he received the Cambridge degree of M.A. and a salary of 100 pounds was joined to his professorship. In 1870 the University of Oxford conferred upon him the honorary dgree of D.C.L. He was knighted in 1871, and a scholarship was founded at the Royal academy of Music out of subscriptions to a public testimonial to him in St. James's Hall in 1872. He died after a short illness, and was buried in Westminster Abbey. Bennett has been called the first English composer of individual genius since Purcell; he certainly was the first English composer who go any real recognition in Germany. He has generally been considered as a follower and imitator of Mendelssohn, although the best English critics deny this. Yet he may truly be said to have held more by Mendelssohn than by Schumann. His compositions are noteworthy for an easy grace, refinement, and elaborate perfection of style.

Sir William Sterndale Bennett (13 April 1816 – 1 February 1875) was an English composer, pianist, conductor and music educator. At the age of ten Bennett was admitted to the London Royal Academy of Music (RAM), where he remained for ten years. By the age of twenty, he had begun to make a reputation as a concert pianist, and his compositions received high praise. Among those impressed by Bennett was the German composer Felix Mendelssohn, who invited him to Leipzig. There Bennett became friendly with Robert Schumann, who shared Mendelssohn's admiration for his compositions. Bennett spent three winters composing and performing in Leipzig.
Wikipedia Biography
TextsTunesHymnals