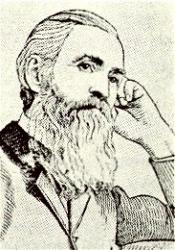 Sanford Fillmore Bennett was born in Eden, New York, 21 June 1836. He and his parents moved to Plainfield, Illinois when he was two years old. He worked on the farm and attended district school during the winter. He was a voracious reader. At sixteen he entered Waukegon Academy. Two years later he began teaching at Wauconda. In 1858 he entered the University of Michigan, Afterward he had charge of the schools in Richmond, Illinois. Two years later he resigned and became Associate Editor of the Independent at Elkhorn, Wisconsin. In 1864 he enlisted in the Wisconsin Volunteers and served as Second Lieutenant. After the war he returned to Elkhorn and opened a drug store and began the study of medicine. He graduated from Rush Medical College in 1874.

Dianne Shapiro, from "The Singers and Their Songs: sketches of living gospel hymn writers" by Charles Hutchinson Gabriel (Chicago: The Rodeheaver Company, 1916)