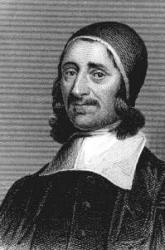 Baxter, Richard. Only s. of Richard Baxter, yeoman, Eaton Constantine, Shropshire, b. at Rowton, Shropshire, Nov. 12,1615. He was educated at Wroxeter School, and for a time held the Mastership of the Dudley Grammar School. On taking Holy Orders, he became, in 1640, Ourate of Kidderminster. Subsequently he was for some time chaplain to one of Cromwell's regiments. Through weakness he had to take an enforced rest, during which he wrote his Saints’ Everlasting Rest. On regaining his health he returned to Kidderminster, where he remained until 1660, when he removed to London. At the Restoration he became chaplain to Charles II and was offered the bishopric of Hereford, which he refused. On the passing of the Act of Uniformity, he retired from active duty as a Minister of the Church of England. In or about 1673 he took out a licence as a Nonconformist Minister and commenced lecturing in London. He d. Dec. 8, 1691. His prose works are very numerous. His poetical are :—

(1) Poetical Fragments: Heart Imployment with God and Itself; The Concordant Discord of a Broken-healed Heart, tendon, Printed by T. Snowdon for B. Simmons, at the 3 Golden Cocks, &c, 1681 (2nd ed. 1689; 3rd ed. 1699). It consists of accounts of his religious experiences in verse, and is dated "London, at the Door of Eternity; Rich. Baxter, Aug. 1, 1681." (2) Additions to the Poetical Fragments of Rich. Baxter, written for himself, and Communicated to such as are more for serious Verse than smooth, London, Printed for B. Simmons at the Three Golden Cocks at the Westend of St. Pauls, 1683. (3) A Paraphrase on the Psalms, With other Hymns Left fitted for the Press, pub. the year following his death (1692). [Early English Hymnody, x., and English Psalters, 6 xii.] The Poetical Fragments were republished by Pickering, Lond., 1821. From this work his well-known hymn, " Now [Lord] it belongs not to my care," is taken (see "My whole, though broken, heart, O Lord.")