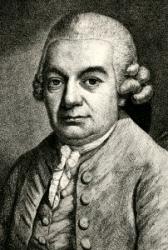 Carl Philipp Emmanuel Bach, born at Weimar, March 14, 1714; music director at Hamburg, a prolific composer, great in all departments; as a writer of sings, odes, pslams, etc., he surpassed all his contemporaries; died at Hamburg, of consumption, Sept. 14, 1788.