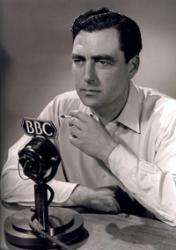 Leslie Thomas John Arlott, OBE (25 February 1914 – 14 December 1991) was an English journalist, author and cricket commentator for the BBC's Test Match Special. He was also a poet and wine connoisseur. With his poetic phraseology, he became a cricket commentator noted for his "wonderful gift for evoking cricketing moments" by the BBC.
Wikipedia Biography
TextsTunesHymnals