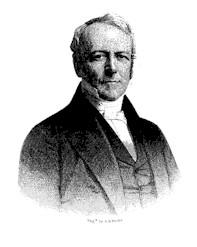 James W. Alexander (b. Hopewell, Louisa County, VA, 1804; d. Sweetsprings, VA, 1859) was often overshadowed by his father, the renowned Archibald Alexander, first professor at Princeton Theological Seminary. But James Alexander was also a fine preacher, teacher, and writer. He studied at New Jersey College (now Princeton University) and Princeton Seminary. Ordained in the Presbyterian Church, he alternated his career between teaching and pastoring; for two years (1849-1851) he was professor of ecclesiastical history and church government at Princeton Seminary. Alexander translated a number of hymns from Greek, Latin, and German but is mainly known today for his translation of "O Sacred Head."

Bert Polman
=====================
Alexander, James Waddell, D.D., son of Archibald Alexander, D.D., b. at Hopewell, Louisa, county of Virginia, 13 Mar., 1804, graduated at Princeton, 1820, and was successively Professor of Rhetoric at Princeton, 1833; Pastor of Duane Street Presbyterian Church, New York, 1844; Professor of Church History, Princeton, 1849; and Pastor of 5th Avenue Presbyterian Church, New York, 1851; d. at Sweetsprings, Virginia, July 31, 1859. His works include Gift to the Afflicted, Thoughts on Family Worship, and others. His Letters were published by the Rev. Dr. Hall, in 2 vols., some time after his death, and his translations were collected and published at New York in 1861, under the title, The Breaking Crucible and other Translations. Of these translations the following are in use:
O Sacred Head, now wounded” a translation of "Salve Caput," through the German; "Near the cross was Mary weeping," a translation of "Stabat Mater"; and "Jesus, how sweet Thy memory is," a translation of "dulcis memoria." The annotations of these translations are given under their respective Latin first lines.