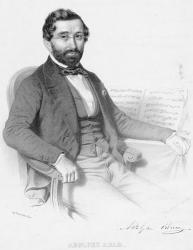 Adolph Charles Adam, born at Paris, 1803; entered the conservatory, 1817; composed several operas; went to London 1832, but soon returned to Paris, where he died, May 2, 1856, aged 53. His remans wer followed to the grave by three thousand persons; and at his death he left some music and his memoirs for publication. He was a very active composer; and among his operas are "Richard Coeur de Lion," "Le Postillon de Lonjumeau," "La Chalet," and many other popular operas.

Adolphe Charles Adam (French: [adɔlf adɑ̃]; 24 July 1803 – 3 May 1856) was a French composer, teacher and music critic. A prolific composer for the theatre, he is best known today for his ballets Giselle (1841) and Le corsaire (1856), his operas Le postillon de Lonjumeau (1836) and Si j'étais roi (1852) and his Christmas carol "Minuit, chrétiens!" (Midnight, Christians, 1844, known in English as "O Holy Night"). Together with his older contemporary Daniel Auber and his teacher Adrien Boieldieu, Adam is credited with creating the French form of opera.
Wikipedia Biography
TextsTunesHymnals