EDITOR’S NOTE: We at Hymnary.org are proud to be part of the Christian Classics Ethereal Library family, which includes not just hymnary.org but also CCEL.org. We present this piece below for your reading pleasure because of our close connection to CCEL.org, including the fact that CCEL.org once housed the precursor to Hymnary, the Christian Classics Ethereal Hymnary. Enjoy!

Another said via email: “Really like the new home page. Was looking for something specific and immediately distracted to a book by E.M. Bounds on prayer. Would not have known to look for it if it wasn’t presented.” The tagline for the CCEL is “bringing classic Christian books to life” and the website is essentially a database of some 1,000 such books selected for edification and education. CCEL stores texts in Theological Markup Language (ThML) format and automatically converts them into other formats such as HTML or Portable Document Format (PDF). And all of the works on the CCEL may be viewed and downloaded in a variety of formats, free of charge.

Because the goal of the site is to open up classic Christian books to people who may have never come across them, the recent redesign feedback was much appreciated by the many people who labored for months and years to bring the third version of the CCEL to life.

Changes made for CCEL users

“We made the changes we made for our users,” says CCEL programmer Will Groenendyk, who played a key role in the re-design. “We have a great site (in CCEL) but we’re always looking to make it better for the people who use it. So to get positive feedback from people after launch was really encouraging.”

The original CCEL website began as a collection of static HTML web pages and was launched in 1993. In fact, CCEL founder and Calvin University computer science professor Harry Plantinga estimates that CCEL.org was one of the first 1,000 websites launched anywhere in the world when it made its debut 27 years ago (compared to an estimated 2 billion websites currently in existence). 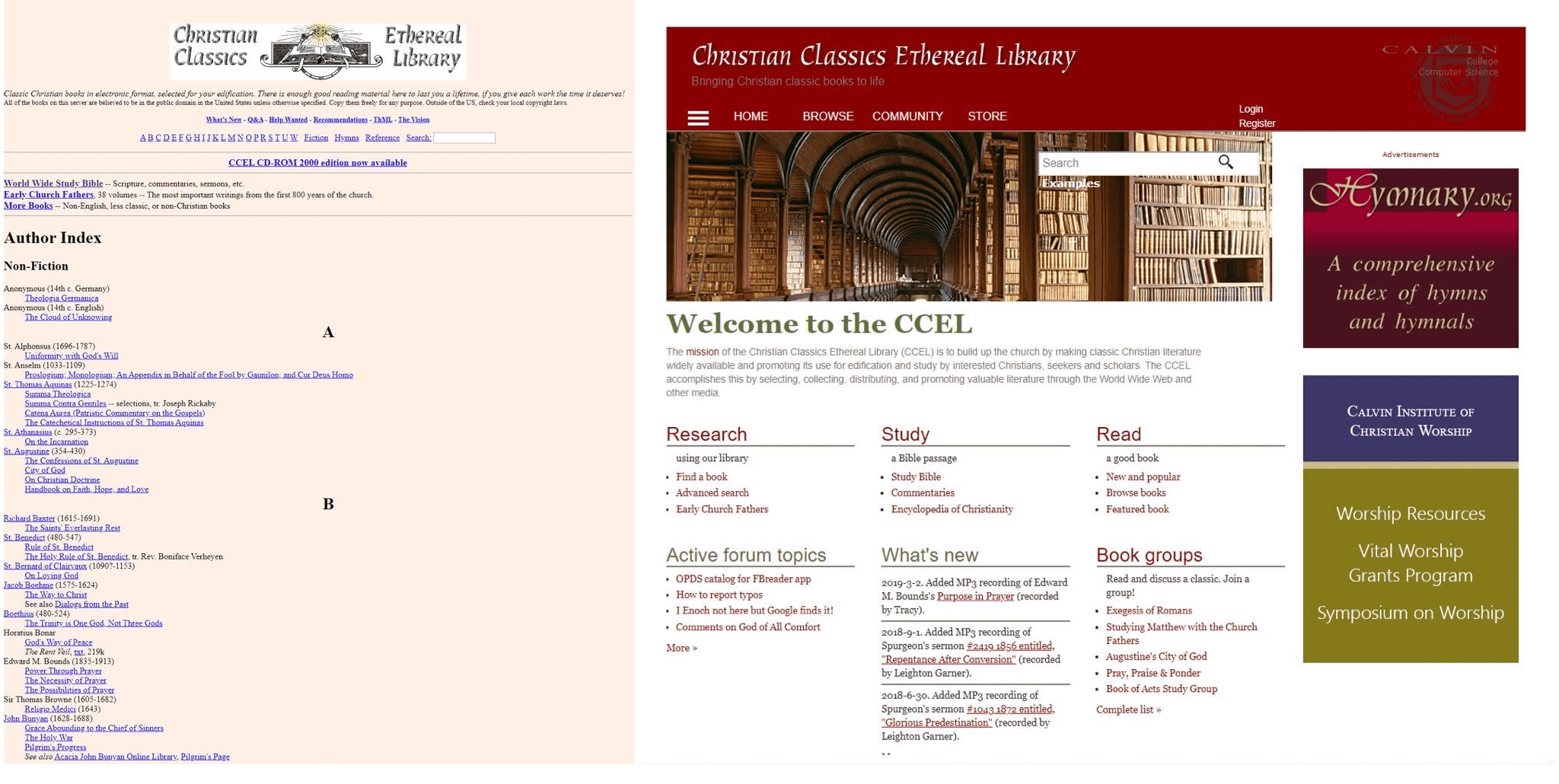 After a decade the CCEL became a database-driven site using the Drupal content management system, but when the version of Drupal that CCEL is based on went out of support in February 2016, the decision was made to take the CCEL in a new direction.

One of the key early people to work on the new CCEL website was 10-year CCEL Board member and computer scientist Steven DeRose, who works in Natural Language Processing and corpus linguistics. “I try to keep one foot in academe and one in the IT industry,” he says with a laugh.

DeRose has been a fan of CCEL, he says, since he first saw it.

“I’m an ‘electronic books’ guy from way back,” he notes, “and seeing a serious collection of quality texts, well digitized, tagged and curated, was, and still is, rare. Anybody can scan some paper and stick it online. Doing serious, high-quality texts and support software is a lot harder.”

DeRose began working on the CCEL update and spent several years on it before making the hand-off to Groenendyk and CCEL colleague Quincy Howe.

One of the biggest challenges, he says, was how best to organize the diversity of works.

“CCEL has small works in collections, large works that were published originally in multiple volumes and many works in multiple editions,” he says. “Cases like those are challenging to catalog and organize, especially when they come up together.”

One thing that wasn’t an issue, he says, was the quality of program code he found.

He explains: “Any program that’s been around for a long time and had a lot of different people work on it is likely to have gotten pretty messy. But I was very impressed with the overall quality and skill shown in the code. That speaks really well of CCEL’s technical management, of Calvin’s computer science professors and of the students who’ve worked on CCEL. Those I got to work with personally also made very positive impressions.”

Such praise is pleasing for Groenendyk and Howe and many others at Calvin who worked at make CCEL3 a reality. But in the end what they’re most pleased about is the enhanced user experience.

A big focus for the newest version of the website is better usability on mobile devices. Another major concern was making sure the new version would be as fast to load as possible. In fact the mobile experience and load times were directly linked as CCEL’s developers created the new site as research by Google found that more than half of mobile website visitors will leave if a webpage doesn’t load within three seconds.

Reflowable interface is a cool piece of tech

Plantinga said that some of the guiding goals of the rebuild were to be user-centered (making design decisions according to what works best for users), to move to a mobile-first design and to always remember that a good online reading experience needed to undergird design decision-making, including what he calls a reflowable interface for books by default, something DeRose said is an impressive element in the new site.

“A reflowable interface,” he says, “where lines re-wrap if you resize the window is the norm on the Web. CCEL, however, has the nearly unique ability to re-wrap not just text documents, but scanned pages where the page is just a big bitmapped image. That involves snipping apart the page into a tiny rectangular image for each word and re-assembling those images into lines on the fly. I think that’s an incredibly cool piece of tech.”

Another area of focus was search.

“The CCEL’s search capabilities constitute a good part of the CCEL’s value to users,” said Plantinga. “They can search for quotes by particular authors, see what the early church fathers have to say on certain topics or find resources for scripture passages. We knew we needed excellent search capabilities going forward as well.”

Groenendyk and Howe noted that the search engine in the new CCEL includes machine learning features. As users search for content within the site, the search engine will take note of how the user interacts with the results and will get better along the way at serving up search results that meet the preferences of that particular user.

Personalization and customization is also behind the new Annotation tool on the CCEL, a function that allows users to highlight sections in a book, add notes and come back to their exact highlighted section and notes in future sessions on the site. Howe did much of the heavy lifting on the annotation feature and noted that it is a distinctive feature of the CCEL that required a lot of sophisticated programming.

“It was Harry’s vision to have a bunch of different ways our users could mark up books,” Howe recounted. “What we came up with is a highlight for me of the redesign. People can do a lot of personalization of our content now that is pretty cool. For example, as they are going through a book, they can create tours for other people to follow.”

One other big change for the CCEL is that all advertising was stripped from the site.

“It’s a place for people to read,” said Groenendyk, “and we figured the user experience would be a lot better if people didn’t have to contend with ads on their screen. So we gave up advertising on the site for the first time in the 27-year history of the CCEL.”

DeRose, who began the overhaul almost five years ago now, says the Calvin team that took his work and advanced it forward got things exactly right.

“I like the new site a lot,” he says. “There’s a lot of creative and interesting tech in there, but it isn’t in your face. Most users won’t ever be aware of the infrastructure that makes it good, which is as it should be. But you really have to ‘build the tunnels under Disneyland’ right for everything to work smoothly on top.”