On any given day, Hymnary.org has some 20,000 or more users from a wide variety of countries accessing the 6,000 hymnals and one million hymns on the site.

But it's not too often that the site is called on to form the foundation for an academic paper.

So when Hymnary's Dianne Shapiro received an email in May 2019 from Monty Lynn, the WW Caruth Chair of Owner-Manged Business at Abilene Christian University, saying that he was interested in completing a content analysis of the texts of hymns on Hymnary.org, and would it be possible to download a .csv file of lyrics for academic research purposes, she and the Hymnary staff were intrigued.

And the interest was only heightened when Lynn said he was part of a research team planning to complete a study in the summer of 2019 which would include quantitative and qualitative analysis of themes related to faith and work integration. The idea, he added, was that the lyrics of Christian hymns capture the theological perspectives of their authors and the times in which they were penned.

"They provide a historical record which can be sampled on a variety of theological and social issues, including views on labor, commerce and money," he said.

Breaking Into Song at Their Desks

For Hymnary director Harry Plantinga, the request definitely was worth pursuing. Hymnary.org supports scholars too he said, adding that the website's first major grant was from the National Endowment for the Humanities.

"We're located on the campus of a university (Calvin)," he said, "so we already operate in an academic context and partnering with fellow academics has always struck us as a great opportunity. We have become, over the years, probably the best resource on the internet for hymnals and hymns and have created a pretty amazing database. So to see our hard work being utilized by Monty and his colleagues is gratifying."

Lynn concurs. "We couldn't have completed this research without the data and assistance of Hymnary.org," he said. And, he said, the research project ended up being unlike any he's participated in previously because of the subject matter.

"This study was unique in several ways for the four researchers," he said. "It extended some of our previous research in faith and work but did so with a novel approach of using hymn texts. The research team was an interdisciplinary group composed of business and music faculty members, and most delightfully, we couldn't help but quietly sing or hum at our desks while we worked. We are accustomed to dealing with financial and marketing data and seldom do these cause us to break into song!"

Singing Hymns at a Business Conference

As for the study, the group -- Lynn and colleagues Sarah Easter, Ryan Jessup and Greg Straughn -- presented some of its findings recently for the Christian Business Faculty Association, which draws much of its membership from business professors at Council for Christian Colleges and Universities institutions, in an unusual session titled "Harmonizing Work & Faith."

"We wanted the session to be interactive," said Lynn, "so we did something I've not heard of in my 35-years of attending business academic presentations: we sang. With accompaniment from a senior music major at John Brown University (host of the conference), we invited the attendees to sing four hymns with us that illustrated the study findings."

About those findings. Lynn said the team looked at what hymns say about work and whether hymn themes vary across time. Among hymns published between 1500 and 2000, songs such as 1782's "We Plow the Fields" and Fanny Crosby's "To The Work," he and his team identified 28 messages about work, such as:

The team grouped these 28 messages into eight themes relating to characteristics of the person, role or task and found that work as a hymn theme increased from 1750 to 1950.

"Two of the strongest themes," he said, "were 'dedication' and 'reward.' We should be dedicated in our work, and heaven will provide rest and reward from labor."

Lynn added: "Joe Hill, an early 20th-century labor activist, appears to have nailed it when he decried that religious songs conveyed the message of 'Work and pray, live on hay, You’ll get pie in the sky when you die.'"

But, he said, Joe Hill did not live to see the reward theme decline after World War II or the "Work in Solidarity" theme rise during the same time. The third most frequently emphasized theme was that "God provides" via resources, blessing and refreshment in labor.

In the coming months, the research team anticipates composing its results in a manuscript and submitting it to a business journal for publication consideration. 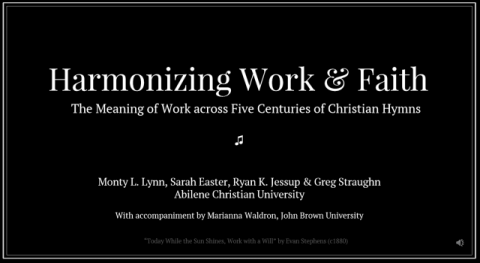